When our first son was born, the name discussion was rather short. We agreed that my father in law would be choosing his first name, but I wanted to be able to select a middle name from my side of the family. Tariq's father selected "Saad", which was the name of his father's elder brother(Tariq's great uncle). I wanted to select a middle name that was important to me, and that showed a connection to and respect for my side of the family. There are certain requirements for Muslims' names(it can't be the name of a pagan deity or denote worship of one, it should not have a bad/negative meaning, etc.). Going through family names I selected one that belonged to my maternal grandfather, one of my father's brothers, his grandfather, and brother in law.

When our second son was born, the discussion was a bit longer as Tariq's father had run out of male relatives' names(mashAllah lots of grand kids!). Tariq and I had a list of possibles for the first name and I was still going to go with a middle name from my family so I had my own list. In the end Tariq's elder brother suggested "Saif" and his father liked it, so the first name was settled. I got four or five names from my side-my father/grandfather's name(dad is a Jr.), my brothers' names(one first and one middle), and my other paternal uncle's name. I decided on my father's name, and that was that!

Occasionally I get odd looks or comments about the kids "mixed" names, but I try not to let it get to me. InshAllah I am planning to raise them to be proud of both sides of their family, where they come from, and to understand why I would give them names that are not traditionally Muslim.
Posted by Aishah at 11:00 AM 5 comments

Friday Feature: An Aqiqah for my boys!

After Saif was born, we started thinking about doing his Aqiqah(for those not familiar with the term-it is an Islamic tradition that involves sacrificing two goats/sheep etc. for each son, and then cooking them to feed family, friends, neighbors, and the needy). Since we had not been able to do Saad's when he was born, we decided to do them both together now, while we are still in Pakistan.

We held the function on our roof, alhamdulillah it is spacious enough to hold a good amount of people. We ended up with around 60 guests. As with every function in our family it was all arranged at the last minute! The orders for tables, chairs, caterers, soft drinks etc. were all given only one or two days before, and the butcher came to perform the sacrifices only that morning!

We got matching sherwanis for Saad and Saif along with groom's kullas(turbans). 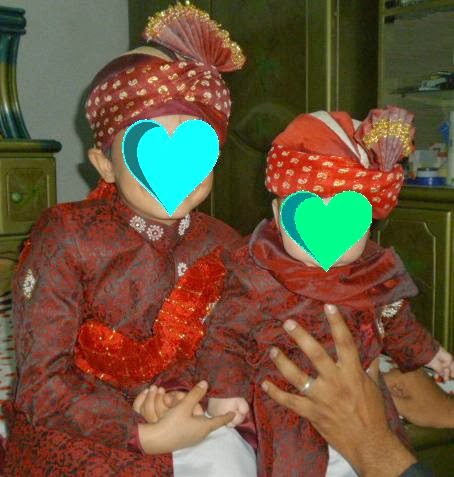 Tariq was going all around organizing all the last minute details with the waiters and food while I stayed downstairs and got the boys ready at the last minute so they wouldn't ruin their outfits. When everyone had arrived and all was ready, I suited up the boys, Tariq came and all four of us went up to the roof together. At the top of the stairs all the younger ladies had lined up to shower rose petals on the boys, and Tariq's father put rose and jasmine hars(garlands) on them. After greeting everyone and passing Saif around like a game of musical baby, it was time to eat. 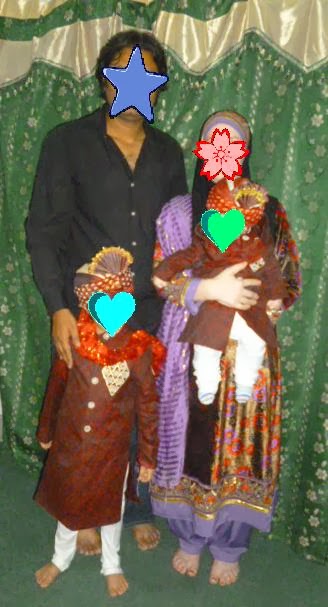 MashAllah the food was fantastic, we had mutton biriyani and qorma with taftans(small round slightly sweet breads), with doodh dulari(a thin pudding with bits of fruits, jellies, and colorful noodles) for dessert.
Posted by Aishah at 4:00 PM 2 comments