I have been working on some little things for the impending little one, some sewing projects and a little knitted set. The knitting is not quite finished, but I did get these two little shalwar kameez suits done.

First is this little set, remnants from one of Saad's Eid suits 2012, and the check fabric is left over from two pairs of lounge pants made for Saad and Dada. I wanted buttons, but Tariq wants snaps, he suggested that we compromise and I can just move the buttons to the upper side of the placket and sew snaps on the inside. I will end up doing it because he is kind of right, it will probably only be worn once or twice, why go through the bother of buttons? 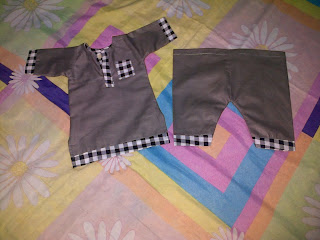 Next is this suit, remnants from Saad's Eid suit 2013- 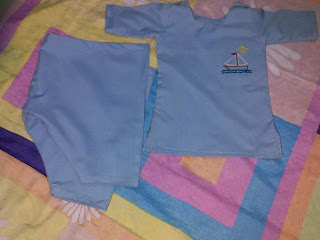 Saad loves the idea that his(not mine apparently :-) will have matching clothes. MashAllah he is very excited about all this, and talks to the baby a lot. 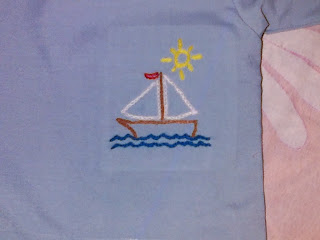 I did a bit of hand embroidery so it isn't too plain. Just free handed a little boat and used chain stitch.
Posted by Aishah at 10:51 AM

Wonderful clothes, very cute and creative I must say! Masha Allah, I am sure little one will enjoy Mommy's clothes made with love :o)!

My first time on your blog :)...
I really like the embroidery on the second vest.Good job :)!
Many greetings...

Free hand embroidery like that is a talent and it looks amazing. Congrats on the birth of your second son, I know it's been awhile, but congratulations nevertheless.

Both the outfits are really adorable and I hope you keep them as keepsakes (if allowed) for their own children someday.