One of Tariq and Saad's favorite things to do together is to fly kites on the roof. 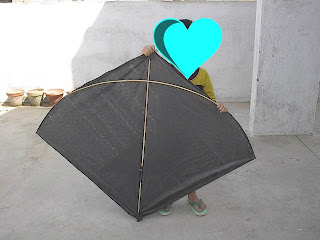 Here is Saad with the biggest kite we have, it is about three feet across, but they don't use it much. 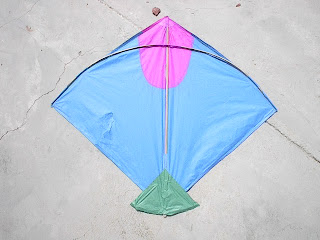 The kites come in all sorts of patterns, and Tariq says they are all made locally. He goes with Saad to some shop around here and picks up 4-5 kites at a time. 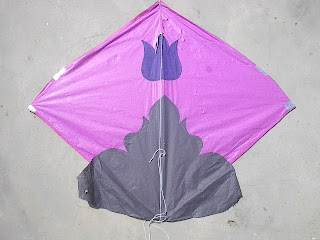 My favorite, I love the flower. 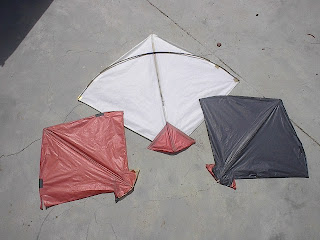 Some of the normal everyday kites.

Flying a kite here is a lot different than how we did it when I was little. That is part of the reason he buys so many kites. The first difference is space, when I was little we went to a place that was wide open to fly our kites, but here in the city space is limited so everybody just flies from their own roof. That changes the way they get the kite up in the air too, we would just run pulling it along behind us until it took off. So instead, Tariq stands in one place and yanks the kite string against the wind until the wind takes it.

After it is up in the air it is not just the thrill of flying that everyone is after. The whole thing is like a mini battle. The point is to cut all your neighbors kite strings so their kite flies away! Tariq buys special string coated in finely ground glass to make it easier to cut other peoples kites. He waits until their kite gets close and he will suddenly start reeling in the string as fast as possible to rub it on the other line and snap it. Sometimes he wins and sometimes the neighbors win. Saad and I find it funny when these little boys in a house behind ours constantly cut Tariq's strings, they cheer and get so happy. They have much more practice than he does, it has been a long time since he was a little boy and spent hours on the roof. Now he mostly does it to play with Saad, and he is still kind of rusty.

I can't get the hang of how he launches them, so mostly I just sit with them and read a book, sometimes I'll ask Tariq to let me fly it for a bit, but as soon as another kite is spotted I hand it back over to him. I don't really want to have a battle, I much prefer just to fly.
Posted by Aishah at 4:00 PM