When Saad was first born his skin was peeling a lot. While we were in the hospital they gave us this huge tub of Nivea cream(the white, not the blue one). Ever since then, the scent of white Nivea is the scent of my baby. 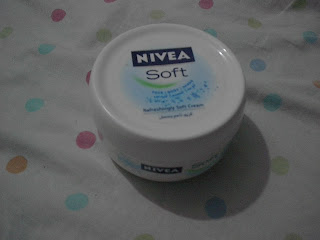 When we came to live with Tariq's family they use Nivea too, but they prefer the blue kind. I found it too greasy to use, and continued using the white one. It is now one of the traditional things that anybody coming to Pakistan brings along(also on the list-brands of shampoo or soap that we like, and all the little comforts that we got used to having that are slightly harder to find or more expensive here).

Every time I open the jar of cream I get the most vivid pictures of Saad as a teeny tiny little thing, all wrapped up in his little blankets, and slathered in cream. It is a simple little thing, but the feeling is so strong. Most people probably have similar strong associations for things like fresh popcorn, the smell of the earth after rain, cut grass.

What are your scent memories? Does anybody have a single scent that is so strongly associated with a certain memory?
Posted by Aishah at 9:46 PM

Email ThisBlogThis!Share to TwitterShare to FacebookShare to Pinterest
Labels: About Me, complete randomness, Friday Feature, Saad

Yes...my elder sister used Johnsons Baby Oil on my niece...since she was the first niece of the family...I used to have a keen interest in her toiletries...

Its has the same effect on me too...whenever I see or inhale...that baby oil's scent...