Every couple of days the Machli wala comes down our street. I have only recently had the chance to try the fish as Tariq usually buys it from the market rather than the machli wala.

He comes by bicycle, and has two baskets that hang from the handle bars. Sometimes he brings fish and sometimes jinga(prawns). The other day my father in law felt like fish, so he stopped the wala, and bought two or three kilos of fresh fish. 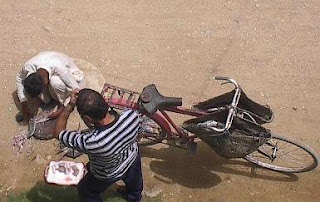 The machli wala and my father in law haggled for a bit over the price per kg. When they reached an agreement, the fish were put in a hanging scale and weighed, then he pulled out a butcher's block and his knife, and sat down right there in the street to clean the fish. It took him about five minutes to scale, clean, and chop the fish up in pieces.

It was an interesting experience, I don't have many opportunities to see fresh fish get from whole to plate like that. It was tasty fish(still have no idea what kind of fish though), but it had lots of thin little bones.
Posted by Aishah at 10:53 PM

Ai he didn't take the bones out? Finding bones in my fish usually ruines my dinner.

:) we bought fish from Metro that big shop I was telling you about... they gutted and scaled and everything there.. very quickly.. me, hubby and abu were all amazed ;)

Thinking, it is good to see you around, I was missing your posts and comments here. I am keeping you in my duas.

Umm Mini-Nope, bones left in. The big one is not too much of a problem, but the fish have these tiny little almost invisible ones that really bother me!

Ammena- I've seen the same setup (live fish) at the Makro(same kind of store, my SIL and her family shop at Metro). That must have been fun to watch up close.