One of the books I picked up at the Urdu Bazaar here in Karachi, it is, I think, my favorite of the lot. The author, Bapsi Sidhwa, creates a story that is easy to fall into. I was so captivated by this book that I read it in a single sitting.

The story follows the life of Faredoon(Freddie) Junglewalla, and his family. It is funny, though a couple of scenes were a bit on the depressing side. It also was interesting to find out a bit about Parsis, and it prompted me to read more about them.

What I liked most was the way the little family dramas were very realistically captured. The back and forth between Freddy and his mother in law, and the little sibling dramas, like when Billy(one of Freddie's sons) takes his sisters' things to "teach them" to be more careful, seem so natural to large joined families. It makes the story so much more interesting, more real.

This is the type of book that makes me really wish there was a sequel, to find out what happens next, or a series to tell the stories of other minor, but interesting characters of the book. I do recommend this one, it was well worth the read, and it will be on the short list of books I would read multiple times!
Posted by Aishah at 7:33 PM 1 comments

I have recently been knitting up a mini storm! Two babies due in our family within a month or two of each other means lots and lots of tiny knits! 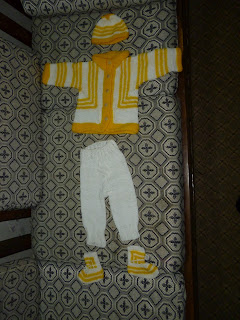 This set is for my SIL's new baby. Her favorite color is yellow, and since she didn't know if she was having a boy or girl she requested yellow and white.


I have completed a couple other projects, including another almost complete set, so inshAllah I will get them up soon.
Posted by Aishah at 8:45 PM 2 comments

I am trying to raise Saad without too much influence from my husband's family's very set gender role ideas. I really dislike the "Boy's don't do this, that is girl's work", that they push on him. The preference for boys over girls is also very annoying. They do love girls, but they pray for boys.

Our Prophet(saws) helped his wives. There are hadiths that show how he helped out around the house, cleaning or mending his own clothes. If it is not beneath our Prophet(saws), how can anyone else disdain household work? What makes the dishes "woman's work"?

To try to keep Saad more even in his ideas, I let him "help" me wash dishes, or sometimes Tariq does the dishes. Saad also sits near me in the kitchen while I roll the rotis(flat breads) and Tariq cooks them. He sits with me while I sew, and "helps" daddy fix the motorcycle. Sometimes I get out the tools to fix something around the house, while daddy plays with Saad. I want him to see that work is not always divided by gender, but by ability.

I am pretty sure we are doing pretty good keeping him even. Whenever anyone asks him if he likes boy babies or girl babies, his reply is-"I like plain babies".
Posted by Aishah at 5:36 PM 6 comments

I think I watch too many zombie movies. I have actually mapped out my Zombie Apocalypse plan. I have different plans, depending on where we happen to be living at the time.

I think it would be easier to defend our house in Pakistan, and it has more space. I figure that if we can see it coming(like in Resident Evil) we could stock up on supplies, dry goods and petrol(for the generator). If we can't see it coming(kind of like in 28 Days Later, it happened pretty fast) it may be a bit more difficult. The roof has plenty of space to grow vegetables, maybe keep some chickens. We have a water pump, so we would have water, but without the gas lines how to boil it? We would eventually run out of stuff to burn.We might be able to hold out for a year or more, with a lot of hard work. It is also very defensible, steel grills on the windows, and nothing higher than our house on three sides.

In the UAE, the house space is limited, but there is the huge yard. Also good for growing vegetables, and my BIL already has a bunch of chickens. The biggest problems would be getting water, and what happens after the electricity finally goes. It gets really hot in the desert, and we are all pretty accustomed to having AC in the summer. The yard is somewhat less defensible, with higher buildings on two sides.

I think what I have learned from this is that I watch far too much TV, and I think I will be cutting down!
Posted by Aishah at 11:28 PM 3 comments

Email ThisBlogThis!Share to TwitterShare to FacebookShare to Pinterest
Labels: weird sense of humor, yes I am joking

A moment in time.

As I lay on my char-pie,
Cotton puff clouds are drifting by.

Cheels in the sky soar and dive,
Watching them makes my heart feel alive.

Whisper soft breezes touch my skin,
This moment could I live forever in.
Posted by Aishah at 9:30 PM 0 comments

Email ThisBlogThis!Share to TwitterShare to FacebookShare to Pinterest
Labels: poetry, slice of life

I would like to just vent a bit. I can't really vent to anyone in person, as what I want to complain about would most likely upset just about every person around me, and in addition to that they would probably not listen to the point and just take offense.

I sometimes try to give advice(to family members, not just any random stranger ;-) on some bit of Islam that I have learned. I try to do it quietly and with sincere good intentions, as I don't want anyone to get upset with me. In almost all cases they don't listen to what I am saying and get offended anyway, no matter how hard I try to avoid it.

Fast forward a couple weeks, and the same person that got all offended at me, comes to tell me that they just heard on TV/read in the paper/a friend told them-the same piece of advice that I had tried to give them.

There is usually the excuse given to me that "You don't know, you weren't Muslim before, you don't understand." That is what hurts the most. I have looked up hadiths, ayats, asked scholars, and tried to give good advice, to help someone. My words count for less(only to some), because I was not a Muslim before. No matter how much I read and study, my words automatically get less credit, for a reason that I can't help.

Anyways sorry to be so negative, just a bit frustrated is all. I think from now on, I will not be giving advice to people who don't want to listen anyway, save myself the stress! :-)