I know it's been a while, so here is a knitting update. I finally finished the Seascape stole I was working on. According to my Rav project page, I started on the 14th of April and finished on the 25th of October, so roughly six and a half months. I was working on a blanket and some other stuff in that time too, so not too bad I guess. 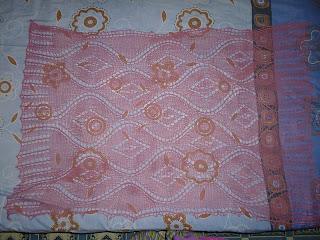 It is not as long as I had hoped, and a bit wider than I thought it would be, but I'm cool with it. It still sits nicely on the shoulders, and has enough overlap in the front to cover all that needs covering.

So final stats-
Pattern-Seascape Stole(Rav pattern page), from Knitty.
Needles-US 7(4.5mm), but the pattern called for a US 4(3.5mm)
Yarn-About 500 meters of random acrylic that I picked up in a market in Karachi

Mods-I added a pattern repeat to get more width, but as it turns out that wasn't necessary. After blocking it was wider than I had anticipated I could have left off the extra repeat and got a bit more length. If I make it again, I will follow the pattern as written. I also used a larger needle than called for, but my yarn weight was a bit heavier also.
Posted by Aishah at 9:13 PM