So after a quick google on Bhai's Ipad for a local park, we found this one-Saqr Public Park, Ras al Khaimah. 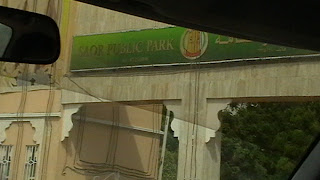 We ate lunch, then sat around in the grass while the kids played on the slides and stuff. 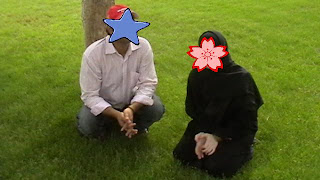 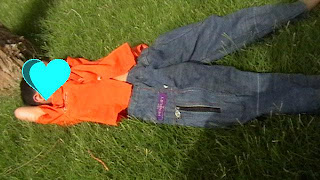 Saad and I went on the bumper cars, with my sisters in law Saad with me and one of my nephews with one sister in law. Our ride was cut short though, Saad's nose hit the steering wheel and we got off real quick. The attendant let one sister in law and my nephew have a second go to make up for ours. Saad spent a lot of the rest of our time in the park complaining how the "bad gari(car) hit me". He was fine, no blood, just a little bump, but it did put a bit of a damper on the rest of the park. 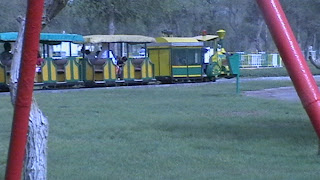 After a while he was feeling better so we all went for a ride on the train that goes around the park.

Just before we left my three sisters in law and I decided to go on one of the other rides, the one with chairs on long chains that spin around and up. Big mistake. I think the park could really use more attendants, and possibly some classes on safety issues. There was only one guy to run the ride, no attendant at the gate, which was just wide open, people were inside the fence rather than waiting outside. Several young girls walked right under the people spinning around, while talking on their mobile phones, and paying no attention to the ride or the attendant shouting at them to get out of the way before they got kicked in the face. I was wondering if they might get hit by a flying shoe or something, but alhamdulillah, nobody was hurt while we were there.

Since there was only on attendant, every one would rush the ride as soon as it started to slow down, to grab a seat. People saved seats for their friends, and would pass off the seat back and forth, not letting anyone else on. One group of teenaged boys rode three times before getting up. There was pushing, and shoving, it was just like a bunch of dogs fighting over a bone. Horrible experience. The park itself is nice, clean and lots of fun, except for some of the rides. If you go I recommend you avoid the more popular rides, and stick with the train and slides/swing sets.


After the park, we decided to head for home since it was getting late. The traffic on the way from RAK to Abu Dhabi was horrible(it's EID, people! everyone is out having fun!). Just outside Sharjah one of my sisters in law was getting a bit car sick so we to the next exit and ended up in the "Heart of Sharjah". We stopped at the King Faisal Masjid, to wash up, pray and rest for a bit. 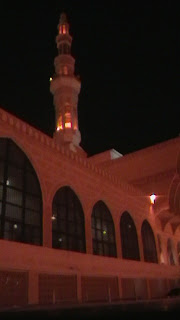 After praying we went for a walk around the Central Souq which was just across the street. 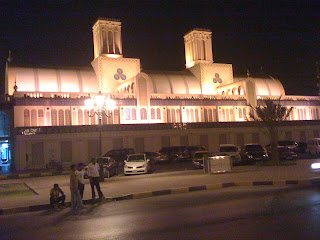 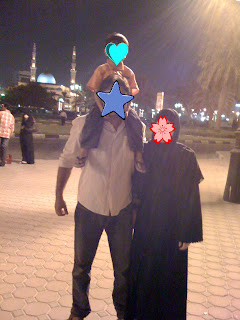 Outside the souq, Saad was a bit tired.

After checking out the souq, we got back on the road and headed home(again), but got side tracked again in Dubai. We stopped by the water and my father in law decided to treat us to a ride on one of the water taxis. 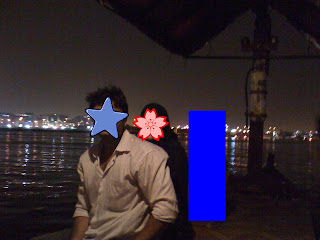 He hired one of the water taxis to take us on a one hour ride, up to one of the bridges(the one with blue lights), and back. It was lots of fun, and I do recommend it if you get the chance.

So that was the end of day 2. We got home shortly after three in the morning, and spent all of Eid day three sleeping and just relaxing.
Posted by Aishah at 11:19 AM