Today Tariq and I(it was too hot to take Saad so we left him home with my SIL) went to the passport office in the Saddar area of Karachi, and we took the Honda 125 this time instead of a taxi.

Since we live pretty close to the airport, it was a somewhat long ride. I think it was probably more than 20 minutes each way. I was sitting side saddle on the back of the bike, and I had put on a niqab(Pakistani style, wrapped and pinned at the back of my head, covering from the middle of my nose down) as I sometimes do when we go shopping.

After we got home and had rested a bit, Tariq kept asking me why my nose was red, did a mosquito bite me? I thought that was probably it, and thought nothing more about it. Until about half an hour ago I looked in the mirror and noticed half my forehead was red also. 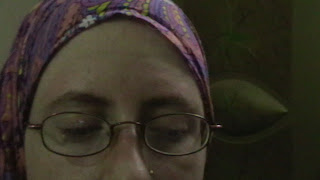 Can you see the line of red on my temple or across the middle of my nose?

I do tend to sunburn easily and have had many, many sunburns in the past. One of the benefits of wearing hijab and abaya though, is that I haven't had a sunburn in years. It took me about five minutes of staring at myself in the mirror to realize exactly why I had a red mask around my eyes and nose. When it dawned on me I felt very silly, how could I not know it was a sunburn?
Posted by Aishah at 9:24 PM

Email ThisBlogThis!Share to TwitterShare to FacebookShare to Pinterest
Labels: complete randomness, I'd forget my head if it weren't attached, Pakistan, transportation, what's up with me

I am very fair skinned and always get what I call a hijabi tan..red face, white forehead...looks very odd..lol..

"hijabi tan", that's cute! I'll have to remember that one for the next time ;-)

hahahaa.. sorry had to laugh :) Just showed hubby you photo and told him how long it took you to ride there.. he was impressed ;)

I tan easily so my hijab tan line is horrendous! Like Sr. June said, white forehead but brown (and now sun-spotted) lower face.

Ahhhh gotta love it! Oh and I do wear sunblock. I've toyed with the idea of wearing a gashwa (full face cover) just while out in bright sunlight but am so sure someone will mistake me for an orc (from the LOTR). LOL

Salams Umm Aaminah,
I do have one of the styles of niqab the they sell in the UAE, the tie on flip types that have 2-3 layers. I really wish I had brought it to PK it would make eating while shopping sooo much easier and I wouldn't have to worry about strange tan/burn lines!

Salams Ahsin/Ammena,
I figured it was you sis, sometimes I have the same problem when I try to get to my blogger dashboard, Tariq is already signed into gmail!

There was a lot of traffic, but on the open bits of road Tariq is a speed freak!

hmmm....be carefull when go outside in sun...I see it to happen to girls have white skin...

So...it gives me freedom to go in sunlight on bike's long ride...

I am now much more careful, as it was painful!

I have always wanted to tan nicely, to be the same shade as my sisters in law are, like a milky chai color. But it never happens, only burns and peeling skin.