Achar...Pickles just aren't what I was expecting

I am used to pickle meaning a cucumber in brine, you know, the dill pickles served with deli sandwiches. The first time I saw achar, I had no idea what it was and had to ask. When Tariq said it was "pickle", I just kind of stared at him. It didn't look like a pickle to me. 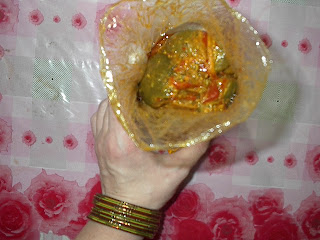 Achar from our favorite place in the market.

I didn't like it at first, it smelled kind of odd, it was really oily, and just didn't look very appealing. I mean- mushy, oily, funny smelling vegetables or fruits? Ick! 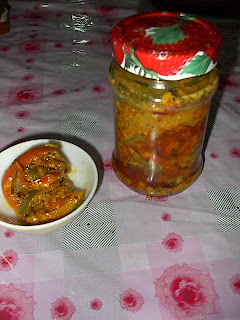 A bit in a bowl to go with breakfast and the rest in a jar.

As with lots of stuff in my life now, it just took a while to get used to. I eventually gave in and tried a bit. First a bit of garlic, ok, not so bad. Then a small nibble of the carrot, hmm, that's kind of tasty. Then a taste of mango and a bit of lemon, wow that's pretty good actually. It did take a while longer to get used to eating the lemon and mango skins though.

We eat achar with dals(lentils) and rice, and other types of food that are a little on the plain side. Usually there is a little bowl of achar served with breakfast, as it is tasty to eat just plain achar with parathas.

We always buy the mixed achar that has green mangoes, lemons, carrots and garlic. Sometimes they put other stuff in it like olives. There are many different types of achar, but we always stick to our favorite, and we always buy from the same little store in the market.
Posted by Aishah at 9:30 PM

The Life of Aaliyah said...

I always associated pickles with things in vinegar like in the UK we can get onions, beetroot and other vegetables pickled in vinegar.

I'm yet to try achar as to me it looks too oily and I'm not a big fan of oily food. I guess it must be pretty tasty though. :)

It is pretty good. You can drain off most of the oil before you eat it, its really only there to keep everything from getting bad, from what I understand.

Salaams; I really love achar and couldn’t live without it! in fact I love very hot food and need Mirch with every thing! It was very hard for me when I went to Iran because people don’t eat spices, but I took a jar of Ahmad Achar with me and all was good! I have stomach ulcers and am not supposed to eat it, but its honestly too good and I recommend all try it! you really can’t get better than parathas with loads of chilly achar! Hmmmm!!

Salaam sis. I was afraid to eat it in while in India but now at home, I loooove mango pickle! We get the popular brand sold over here... dangit, I just forgot what it's called!

Anyway, we spread a bit of cream cheese on a cracker and top it with some achar. My stepdaughter ADORES it. :-) And I confess, I really love the red oil on it!

Roshni, One of my favorite snacks is paratha with achar! I don't like the mirches too much though, but Tariq loves them.

Umm Aaminah, Is it Shan Achar? I like Shan, and we'll probably go with that when we're back home, so much easier to find. I was a bit nervous at first when I saw how they sell it in the market(open to everything), I was afraid of getting a strange sort of food poisoning or something, but I have adapted pretty well and can eat just about anything now without getting sick.

My husband loved this garlic achaar they sold at Macro, but they changed their supplier or something b/c he said it didn't taste as good recently. I only really like same ka achaar - made out of same beans.

Salams Gori Wife,
My husband can tell the difference between the little shop we normally buy from and any other one. I don't really see to much difference, but maybe I am just not used to it?

Garlic is one of my favs, and my son likes it too, he will pick through the jar(we always buy mixed achar) to find it!

I make achar in the summertime. Usually Memorial Day weekend I put up a few jars. I use NO oil in mine, and my in-laws from India rave about it (and are surprised at the no-oil).

It's more prepwork than anything else. No stove to stand over. I prep everything and put in scrupulously clean airtight glass jars, then set them all in the sun for 3-4 months, occasionally inverting the jars, so the juices that come out can redistribute.

I've done lemon, lemon lime, and a "kitchen sink" achar (which usually includes green mango, chiles, ginger, lemon, lime, a little bit of everything I might have on hand towards the end of my achar making frenzy.

What recipe do you use? I have only made lemon achar once, working myself up to something a bit more complicated :-)

I had the same idea of pickles as you did haha.

Even I was looking at a jar and thinking that doesn't look a bit like pickles.

It took me a year before I dared to try it, the lemon version. It looked too much spicy, but it is nice indeed.