We had a sweet cat in Abu Dhabi. Tariq found her abandoned near the first apartment building where we lived in Abu Dhabi, around June/July of 2008. We called her "Mano", no one liked her except Tariq and I. All the in laws have a thing about cats because they are everywhere here around our Karachi house and always making things dirty. When we moved to a new flat with a nice big yard just outside the city we took the cat with us. 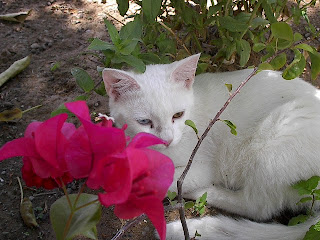 She was a sweet little cat, always wanting to play. Still no one liked her. She got rid of the mice in the kitchen, and still they wanted to get rid of her. She always wanted to sleep under my father in law's bed, was always rubbing on everyone's legs for attention, and when my father in law was watering the garden she always rested under the flowers nearby him. Everyone was complaining about how she got hairs all over everything. Tariq, Saad and I left to return to Pakistan in October of 2009 after visiting for only about a month. Saad missed Mano and always wanted to pick up the dirty feral cats around here. Eventually the rest of the family got used to Mano, and no longer said anything about getting rid of her. They did not exactly like her but tolerated her.

When my father or brother in law would take a walk to a nearby market for something Mano would follow them and wait outside the store until they came out. When my sisters in law went walking for exercise she followed them as well.

The day before yesterday my father in law and Tariq were Skyping when he told Tariq that the cat was ill, with vomiting and diarrhea and she wasn't eating or drinking, he wanted to know what he should do. He seemed concerned, worried for the cat that they hadn't wanted before. One of my sisters in law carefully opened her mouth and tried to get her to drink some water.

He asked some friends of his about where to find an animal doctor, and decided to take her to the vet the next morning. He was checking on the cat and while he was patting her she passed away.

He was so upset. Everyone was. After almost three years with us she had become important to them, they just hadn't realized it until it was too late.

Goodbye little Mano, we loved you.
Posted by Aishah at 3:25 PM

Thank you both. She was a sweet little cat, at least we had the time with her that we had.

Oh, I'm so sorry to hear that.