The wale(door to door salesmen) sell different things according to the seasons. When it starts to cool down and all during the winter there are wale that sell Khes(sounds like "case") and cambal. Cambals are just soft comforter types of blankets, thick and usually fuzzy. The khes is a thinner woven blanket(here is a very detailed article on khes and other woven fabrics common in Southeast Asia), that is very common in the Sindh and Punjab ares of Pakistan. A cambal wala, mostly they carry the blankets tied onto their back instead of on a cart like many other wale. 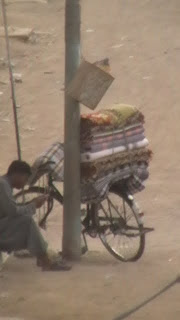 The khes wale usually come on bicycles, with the khes tied in a stack on the back and a couple on the front handle bars for display. Khes come in sets of two or four, and the plainer ones are usually still in one big piece that you have to cut and finish the edges yourself. There are fancier khes that have already been cut and have a finished edge, sometimes a fringe or tassels. 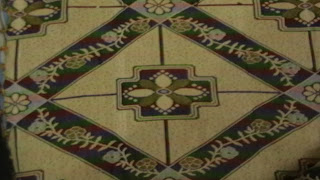 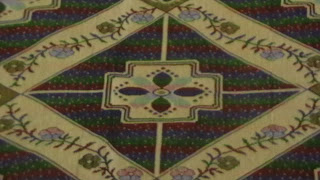 The less expensive, plain types of khes are generally only two to three colors and have a very basic checker type pattern. Other khes have elaborate floral motifs with five or more colors, and most are reversible. 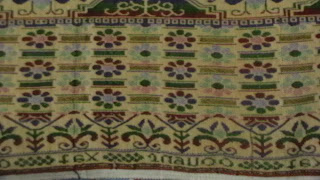 Fancy design on the long sides 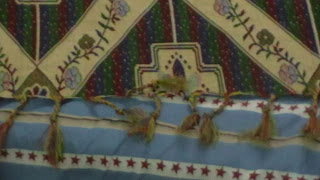 The shorter edges with tassels. 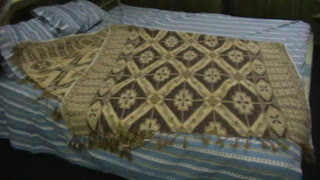 This is one of the set of khes that Tariq bought for me last winter.
Posted by Aishah at 2:33 PM

You brought back some lovely memories with this post!
When I left Karachi, I was able to stuff my huge fluffy green cambal in to my bags, but my khes were among the many things I was forced to leave behind! I don’t know who finally inherited the remains of my flat, but in the 5 years that I’ve been back in the UK, I spend each year trying to persuade some one (any one!), to bring a set of khes back for me! Oh and I brought a beautiful set of Sindhi bed sheets back with me; some are printed, and some have mirror work on them. In Karachi they were on my bed, but back here I have them spread on the floor with cushions; and they really brighten the room mashallah!

Interesting. I had seen these but didn't realize that they had a special name. How fun to have door to door service.

A little note-wala is a suffix that means sort of like one-who, or one-who-has, or one with, possessing X. So moonchwala aadmi, the man who has a mustache, or a mustachioed man, laal duppatte wali, the (female)one with the red duppatta, khes wala, chaiwala, chooriwali, etc are of course selling these items and means seller here, but really it means possessor of X. But -wala itself cannot be used alone. It has to be attached to something. If someone asks which paraatha do you want, you can say ghee wala, you can say yeh wala, voh wala, pehle wala (the first one), kal wala, himmat wala (the one with courage),
it is also in describing a profession. It has some other usages in grammer, too (like barish shuru honi wali hai---it denotes something is about to happen.

Some people even have X-wala as their last name. It is more common with Parsis, but some Muslims also have these X-wala names. No joke but I have heard of Enigineerwala, Screwwala and Lamplightwala among other interesting -wala names.

A seller is a farosh.

Salaams dear sister Aishah, thanks so much for your kind offer; that meant a great deal to me!
And about your Urdu; I just wanted to say that I’m sure its better than you think! When I first moved to Karachi, I went thinking my Urdu was not too bad, but when I heard every one else speak, I felt like I knew nothing! Their Urdu was so fast, there was so much Karachi specific slang that I didn’t know, plus; words mean different things to different people depending on where in the city they live, whether they are Punjabi, Sindhi etc, I felt out of my depth! I realise that allot of this stemmed from not feeling confident enough to speak! But when I did take the plunge, I realised I knew more than I realised! And I understood allot as well! So believe in yourself; I’m sure your Urdu is good and will only get better with time Insha Allah.

I love the Karachi city life posts and pictures you post. I took a video once of a sabziwala coming down our alley, I'll have to go back and check if I ever posted it.

Salams Gori Wife,
This is part of why I love your blog so much, especially your PK trips. I love seeing the little bits of Karachi that you post. It is so cool to see the similarities and differences in the experiences that other gori bloggers have.