When I was a young child I was not very heavy, not too skinny either, just about average. 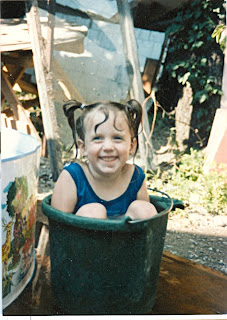 Me as a little one

Around eight or nine years old I started to gain weight, and through High School I was pretty chunky. Towards the end of school I started to slim down a bit because I was walking more, to and from school, and to get to work. After High school I got down to a pretty good weight, and I was pretty happy with how I looked.

My weight yo-yo'd going from healthy to unhealthy, working in fast food definitely didn't help. Just before I met Tariq I had slimmed down again, then after we got married and were pregnant I ballooned back up to almost 200 pounds(just over 90 kilos). I was really unhappy with the way I looked. 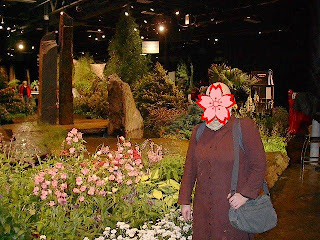 When we moved to Abu Dhabi, I was still pretty heavy, I out weighed all of Tariq's sisters, by a lot. I always felt heavy and unattractive. I did start to loose weight though, but it was very slowly. When we came to Pakistan I dropped a lot of weight very very quickly. Everyone else was drinking the local water(boiled) and not getting sick, so without thinking I drank it also. I did not think about the fact that the family had been drinking the water here since birth and so they were used to it, I was not. I was horribly, horribly ill(lasted about a week or 10 days), on at least four separate occasions. It was not pretty. I was so weak after each illness, but also a lot slimmer. Tariq switched us to bottled water only for all cooking and drinking, because of how sick I was. 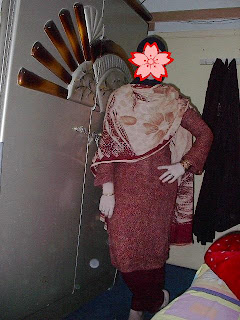 I am now slimmer than I have been in a long long time. But even though I am happier when I look in the mirror, I still have the image in my head of myself as fat. I still think that I am heavier than I actually am, and I don't know when(or if) that will ever change. I do work harder to stay slim, proper portions and less fast food, so it will probably get easier as I go along to stay this way, because it has become a habit.

Sometimes I wonder though, when will my mental image of myself match the one I see in the mirror? My New Years Resolution- to stop having a negative view of myself, to be happy with who I am(no matter if I stay slim or gain a bit of weight).

Email ThisBlogThis!Share to TwitterShare to FacebookShare to Pinterest
Labels: About Me, body image, Friday Feature

Asalam Alaikum,
Today I made mooli paratha(daikon radish paratha). This is the third or fourth time I have made them and I am really close to perfecting my own version. Normally in Tariq's family they don't eat mooli paratha, but it is quickly becoming one of our favorites. 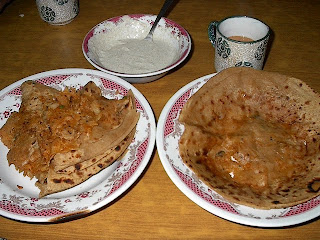 We had them after maghrib time, with a nice cup of hot chai and a simple thick raita(yogurt sauce). It was so good, a bit more tweaking the recipe and I think it will be ready for posting on my food blog.
Posted by Aishah at 7:04 PM 3 comments

Email ThisBlogThis!Share to TwitterShare to FacebookShare to Pinterest
Labels: food and drink, Pakistan

Asalam Alaikum,
Our fourth anniversary was yesterday, so at midnight Tariq surprised me with a cake that he smuggled into the house without me noticing. 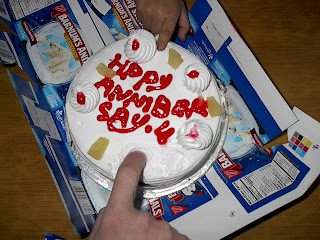 Me and Saad like to dig right into the frosting. Strange spelling, great taste.

When we went out for dinner, we couldn't decide where to go, tikka? Pizza? Fancy Restaurant? So we decided to ask Saad what he wanted to eat, and he said the only place he knows by name-McDonalds! So burgers and fries it was. 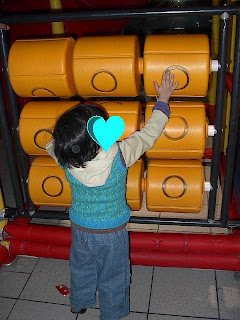 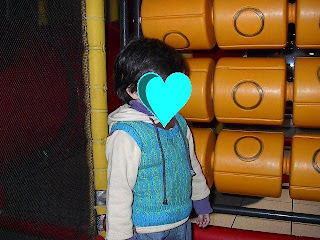 Making an ugly face because those kids won't get out of HIS play place. Silly baby. 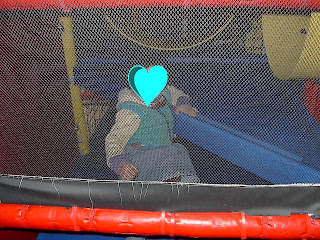 Finally all the kids left, time to play! 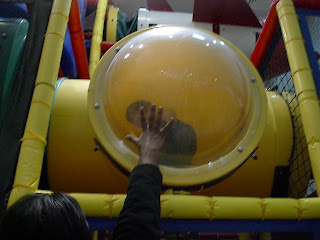 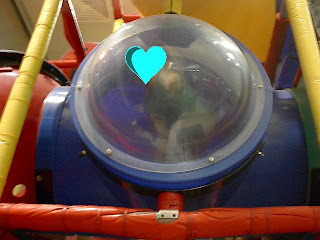 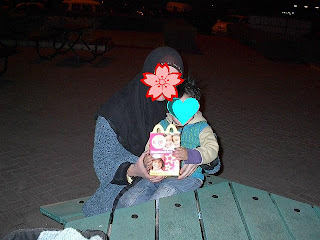 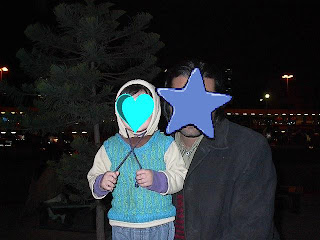 InshAllah, somebody I know is coming to Pakistan soon, and I was struck by this strange idea for a little meme. At Jinnah airport here in Karachi there is a sign(actually a whole lot of signs), that look like this- 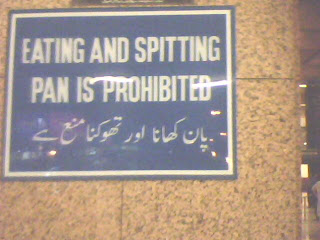 Since a lot of people that come to visit Pakistan come through this airport and this is an easy to spot landmark- that is the meme.

Part 1.Take a picture of this sign in the next time you go through Jinnah airport, you can be in the photo if you want but you don't have to be. You can be as creative with this as you want.
Part 2.Post the photo to your blog, with this list.
Part 3.Leave a comment on this post with your blog post so we can check out your pic.

You don't have to a visitor to Pakistan, If you live here it would be awesome to see your pics too!
Posted by Aishah at 11:33 PM 5 comments

My Pi shawl is done! 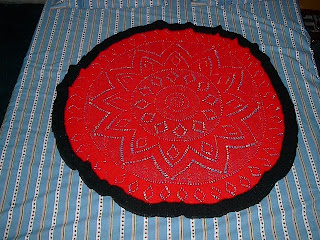 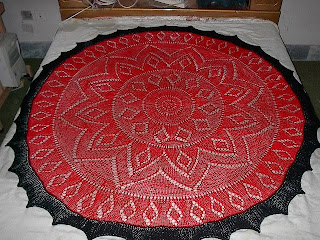 The shawl while blocking. 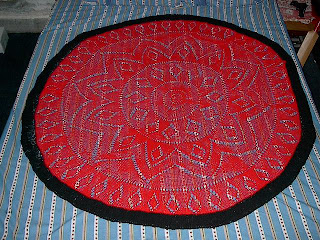 After blocking and removing the pins. 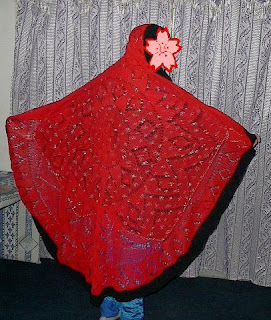 The model shot, to give you an idea of the size.

Pattern:Pi shawl(July) from the Knitter's Almanac
Yarn:8 skeins(roughly 800 yards) random red acrylic from Abu Dhabi, and 2.5 skeins(roughly 500 yards but I am not exactly sure) "Parley", also acrylic that we got in the market.
Needles:US 6

Details:I used the exact lace patterns suggested in the Almanac but shortened the last pattern repeat(due to running out of red), and did only one row of diamonds on the outside. The black border is the sideways knitted on garter border, 10 stitches wide. I was just going to leave it unblocked until I read about a technique for blocking acrylic on Ravelry, where you use an iron to steam it slightly(being careful not to melt it). The good thing is that being acrylic it will not have to be blocked again after washing. The unblocked diameter was 44 inches, and after blocking the diameter was 66 inches. In this shawl there are more than 43,000 stitches(I was so excited to find out how many), and it took three months and six days to complete(it hibernated for about a month because I had to go buy the black) This is the largest project I have completed so far, Alhamdulillah it is DONE! I feel like dancing and singing at the top of my lungs!
Posted by Aishah at 2:41 PM 3 comments

First Friday Feature! -Me and My Hijab 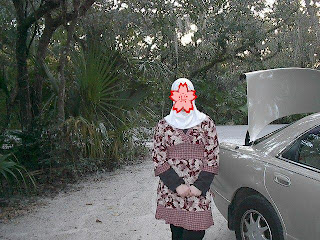 Me in Florida, about a week or two after I said the shahada with regular clothes and an amira hijab

After I said my shahada, I started to wear a hijab. At first I just wore my regular clothes(sometimes with a long sleeved shirt underneath) and an amira style hijab, or a large square folded in a triangle and pinned under my chin. I started to buy clothes a piece at a time that were longer, or looser. Tunic style shirts with loose jeans, or a long skirt and top that reached mid-thigh. It was a slow process, partly because I couldn't go and spend a whole bunch of money on a whole new wardrobe all at once. Eventually I was able to purchase an abaya, and then my awesome mom got me a second one in a pretty blue color. After that I could just wear whatever I wanted and then throw an abaya on over it. 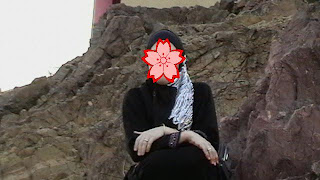 In Abu Dhabi, in a shayla with abaya.
I was still learning how to wrap the shayla(smaller rectangular scarves) type hijabs, and had not really had a lot of experience with dupattas(big rectangles that come with shalwar kameez suits). Dupattas are really really big, usually at least one yard wide by two yards long. When we came over to live with Tariq's family I started to wear shalwar suits full time. It took a bit of time to get used to wrapping the dupatta, but eventually I got used to it and now it just takes a couple seconds to wrap and go. 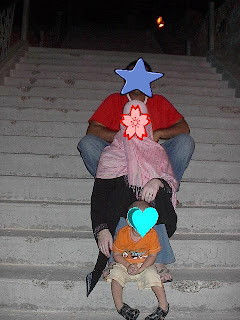 At Jebel Hafeet, in another slightly larger shayla.
I still get lots of questions about my hijab, and sometimes odd looks. In many families the way I wear it is not common. A lot of women wear the dupatta loosely draped to cover the top of the head and chest, I wrap it more tightly so that only my face is visible. I did occasionally get pressure from other women to be more "fashionable", to wear my dupatta differently, but by now everyone knows that I am not going to change and they just leave it. 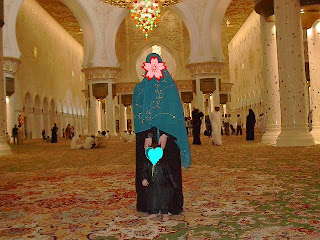 Our first visit to the Sheik Zayed Masjid, in an abaya with a dupatta.
Posted by Aishah at 2:04 PM 5 comments

I always have ideas for blog posts, but when I sit down to write I get distracted.
So I have decided to try to write more, and I think it will help if I have some sort of a deadline, to motivate me. So, InshAllah, every Friday I will try to write at least a little something.

Some topics might be-
1.stuff I see
2.general cultural tid-bits as seen by a gori
3.related to #2-little things that are interesting/different about living in Pakistan
4.useless trivia
5.not so useless trivia that might be useful for other gori wives out there
6.personal experiences in Islam
7.completely random stuff that may or may not make sense

I will probably still be posting randomly between Fridays as well.

I have recently completed lots of little projects. We went to the market and got some buttons to finish a couple of my projects, and also picked up some yarn.
Remember Saad's favorite book? This first project is one of my favorites, it is so cute! 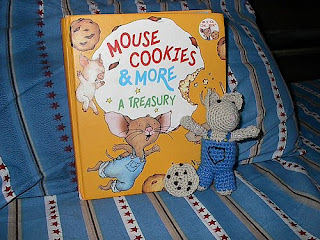 Next up is these fingerless gloves for me- 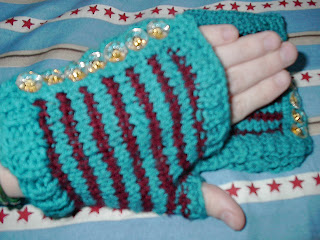 Pattern:Button Band Fingerless Gloves from Lindsay, over at Knitting Duck
Needles:US 7
Yarn:Acrylic
I did end up making them a bit too short, I ended up having exactly enough to finish, with a yard to spare. I might make another pair for my sister-in-law, as it was a really quick, fun project.

And another version of the BSJ, this is the seventh BSJ I have made and I just can't stop. 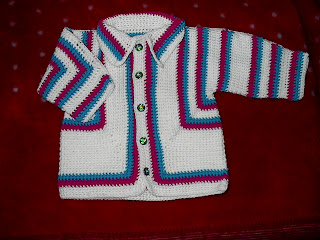 Pattern:A remix version of this pattern. The numbers are the same as the original BSJ and you just use the shaping of the stockinette version.
Hook:US F
Yarn:Acrylic
I love the zig-zag look at the color changes.

Lastly there is a quick vest for Saad. 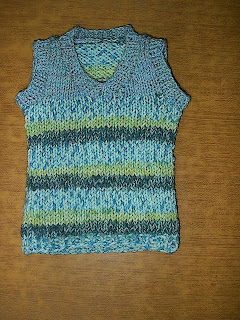 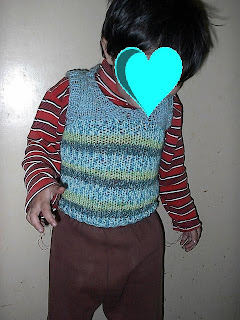 Pattern:No Pattern just made up as I went along.
Needle:US 8 for the ribbing, US 9 for the body
Yarn:Last of the Plymouth Encore, and some Bally double knit. I ran out of the Encore at the split for the V-neck so I used the Bally to finish up the shoulders and for the ribbing at the neck and armholes.

I should have made it a bit longer, but overall I am happy with it. It is mostly just for wearing around the house as it is getting a bit cool here in the evening.
Posted by Aishah at 10:46 PM 1 comments