Step 1-
Fold the cloth in half length wise, then width wise. Arrange so that the selvages are facing towards you with the with the four corners on your left side.

Step 2-On the fold side measure down your desired length(to find your length measure from your waist to just below the bone on your ankle) plus three inches, and mark. Measure on the selvage side also, then mark and cut straight across. 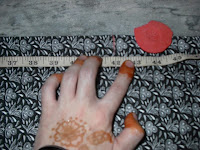 Step 3-On the side that you just cut measure from the fold side down seven inches and mark. This is the bottom of the shalwar, it must be wide enough to put your foot through with a bit of extra space. Measure around the ball of your foot and if you think you need the leg a bit wider you can add a couple inches, but seven(fourteen total) works for most. 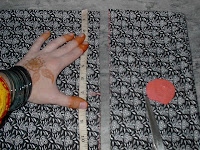 Step 4-On the selvage side mark at the half way point. 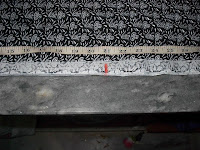 Step 5-Draw a diagonal line connecting the two points, and cut along the line. 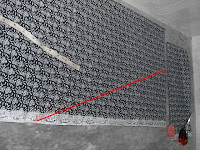 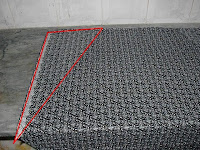 This is the approximate position of all the pieces. 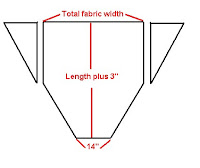 Step 7-On the triangular piece that you just attached to the main leg, you will cut off the outer point because this is for the crotch seam. Measure straight down from the top, you want the edge to be 17 inches, draw a line and cut the excess. You can sort of see in this picture where my chalk mark is, it should be several inches out from the seam that you sewed in the last step. You should do this for all four sides. 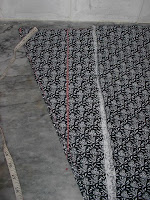 Step 8-Now you will sew the crotch seams. Place the two pieces together with right sides facing. First sew one seam from the top straight down one side(green line in the diagram). On the second side(the seam should be one inch wide) start one and a half inches down from the top and sew straight down. 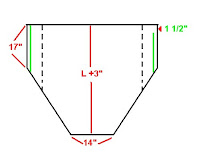 Step 9- On the seam that you just sewed, press the edges away from the seam. Fold the raw edges under half an inch, and sew as in the picture below. 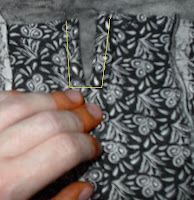 Step 10-Now sew the space for the drawstring. Starting at the opening you made in step 9, fold the top down half an inch, and then fold again one more inch and sew along the bottom of the fold. Sew all the way around the top, until you come back to the opening, and sew over one inch of the first stitches to secure the opening. 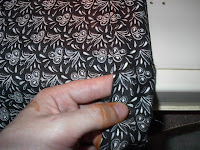 Step 11-For the bottom of the feet, you will need a medium weight interfacing, you could use a fusible if you want, but we don't. Cut two stripes that are one inch by 18 inches. 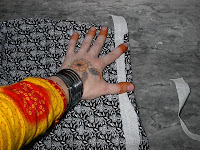 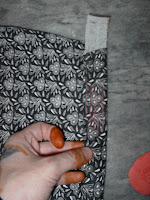 You can kind of see the lines in this photo-

When you have finished cut the extra interfacing even with the cloth.

Step 14- Now you will sew the inside leg seams.

With the wrong sides facing measure on both of the foot openings out from the fold seven inches and mark.

At the crotch seam measure up half and inch and mark 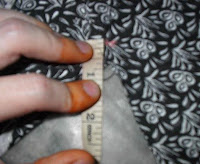 And that is it, the finished simple shalwar should look something like this(ignore the white lines, my cloth had a misprint that I didn't notice when I bought it). 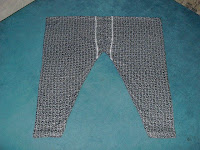 If anyone has any suggestions to improve this tutorial or if you found it confusing make a comment and let me know.
Posted by Aishah at 4:36 AM

Ma sha' Allah a nice tutorial so far... That definitely sounds like what the aunties do, making triangles and moving pieces around. My question is about women's shalwar. My husband's shalwar are like the ones you describe, but mine have always been made with about a 6 inch straight band around the top, then the legs are in the shape that you show. The tailors gather more tucks in the front between the band and the leg pieces, and have fewer tucks in the back. I always have trouble spacing out my tucks nicely.

Is the men's style more comfortable? Maybe I should try one like that... It is certainly much faster to sew! I wonder if any of the aunties would look at me funny if they saw that I were wearing that style. All the women in my dhs family wear the style with the tucks. Do women in your family wear the straight shalwar?

InshAllah I hope to make this a continuous series of tutorials, so hopefully one of the up coming posts will detail the belt type shalwar. I wear the belt style mostly, I find it a lot less bulky in the hip area. The plain style adds too much weight for my taste!

I only have one sister in law that wears the plain style, but she is on the tall and thin side so it looks pretty good on her. From what the other sisters say, the plain style is really old fashioned(or only for older women). The only time they wear it is when they need to sew a suit really fast because the belt type takes a little more time to sew.

marvellous tutorial .im obliged to allthose people who spend their precious time and make us learn what they know.Thanks laot.God bless you.

Hi Aishah, many thanks for the tutorial before i post my doubt. After step 6, i'm bit confused with the 2 side triangles in the diagram. could you pl explain me?

Salam sister thanks for such an step by step tutorial,please can you tell me where I can by the interfacing from for the salwar and kamees because I know they are two different weights but do you buy them on big pieces and cut it out

Here in KHI I buy both kinds of interfacing from little tailoring material shops that are every where. In the US you can find it in fabric stores, and some craft stores(Joanns, etc.) I have even found it at Walmarts that still have a fabric section. I buy it by the meter and then just cut off what I need at the moment.

Hello, thanks a lot for sharing your knowledge! I was looking exactly for this and hope I can sew as well as you soon... :)
Greetings from Brazil

This is a nice tutorial, thank you ; can I suggest another salwar pants tutorial