Asalam Alaikum,
In our family every body has their own Janamaz, but we all usually just use whichever one is closest. When I went to Pakistan I got to pray on my Mother-in-laws Janamaz, it is very old, and has bare spots where you stand and also where you place your hands. 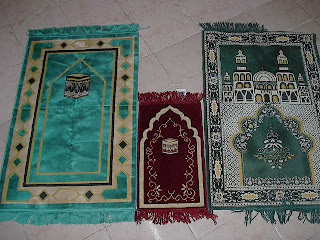 The Janamaz on the right is the one that my DH and I bought when we were first married. We bought it at the Arabic grocery where we lived in Florida and we have shared it for a long time.

The Janamaz on the left and the little one in the middle have a little story that started during the Hajj at the end of December 2006. I have two marriages, one from the state of Georgia which was on December 27th 2006. The second was on Eid ul-Adha which fell on December 30th. That year my Father and Mother-in-Law were Alhamdulillah able to go for Hajj, so when my DH called them to tell them that we got married they were in the middle of making their Hajj. Ammi(MIL) bought the Janamaz on the left side for me after the first phone call(DH hands me the phone and I speak almost no Urdu and Ammi spoke no English) , and also one little Janamaz to save for when we had our first child.

We found out about our baby in February and Ammi was so happy. Sadly she passed away not long after we found out so we never got to meet in person, but she had packed up all the things she had saved for us including these Janamaz. It gives me a really nice feeling to pray on this rug that Ammi picked for me, and the baby really likes his too. 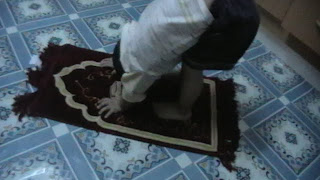 Oh he is so adorable! And what a great story to go along with the rugs. Even though you never got a chance to meet her, you must be reminded of her often when you pray.