And so because I haven't taken pics of any of my new stuff, here is some old Stuff that I never got around to posting-
To start here is the Tam I made for my Aunt, from Knitty(thanks to Charmaine who posted hers which reminded me about mine. 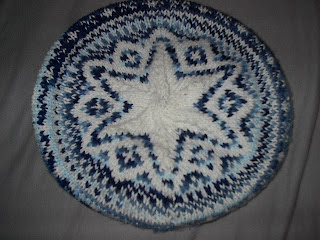 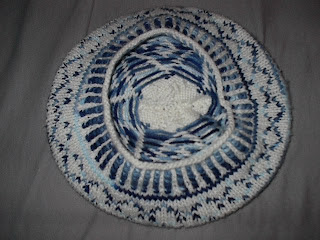 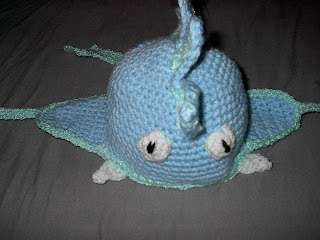 This monster was made for my husband's cousin's son who is three, and has a thing for dinosaurs. 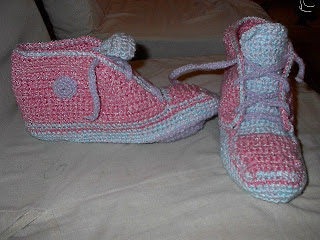 These were for my husband's cousin's wife, who has a thing for chucks and for pink.
Posted by Aishah at 9:07 PM 1 comments

I am a bad blogger, i have said it before and now i say it again...bad bad bad.

But in other news, I have left the relative comfort of my parents house in Boston, for the very strange and slightly uncomfortable Abu Dhabi, UAE. I am not happy with many things here. If I had to make a list, my top 3 would be- the heat, the fact that there is no real quality yarn(I wont even dream of hopping for a LYS), and the fact that about 2 months after i got here, My dear, dear companion and link to the other knitters out there-Ravelry-was BLOCKED. I want to cry every time i say it. It is a very unfair and very stupid thing done by some very stupid people.

"We apologize the site you are attempting to visit has been blocked due to its content being inconsistent with the religious, cultural, political and moral values of the United Arab Emirates."

What could possibly be so offensive about a bunch of knitters? We are by far one of the least offensive groups of people I have ever seen.

At least twice a day I want to go down to Etisalat and do some protest knitting in their lobby. But then I think, if I do that the government here will probably block anything related to knitting and then where will i be?

Also on my list of things to hate- MEN STARE. In the US people stare for a second because of the abaya and scarf, then they look away quickly like they are afraid or something. But here, in the Muslim country where they are supposed to "down cast their eyes and be modest" they stare at me in what i can only call a slimy way, it makes me very uncomfortable.

Of the nice things,(besides my Husbands family-they are all super nice) are the textile stores, and tailoring material stores. There are whole sections of town filled with them. This is a very good time to do more quilting, and i dont think i will ever buy ready made clothes again. Also very good is the fruit market, not that i get out of the car to select the fruit very often(see above-MEN STARE) but i have always loved the idea of going to pick out fresh fruit from a market according to what is in season. Apparently right now is Mango season. You know in the US i never really liked mangoes, now i know why, they had no taste, but here the mangoes are so tasty.

Inshallah, I will have some pics up soon, i have complete a couple of things and without ravelry, im kinda at a loss.
Posted by Aishah at 11:45 PM 3 comments

Email ThisBlogThis!Share to TwitterShare to FacebookShare to Pinterest
Links to this post
Labels: Abu Dhabi, moving, slice of life, what's up with me
Newer Posts Older Posts Home
Subscribe to: Posts (Atom)