Saad started school this week! I am so excited! We went on Monday to take his admission, the school is very close and one of my sister in law's friends is a teacher there. His first day was Tuesday, we went to drop him off and he started crying. The teacher had to carry him in. She said she would call if the crying got too bad. We stood outside for about ten minutes listening to him, then we went back to the house.

He has started a bit later than most of his cousins, who all started in nursery classes or Montessori at about three. They just put him in KG-1, because when the teacher came to try to see what he already knew, he refused to speak to her(he is generally very very shy).  Now though, he is always saying "my teacher said this" and " I helped my teacher with that", so he seems to be getting over the shyness a bit. 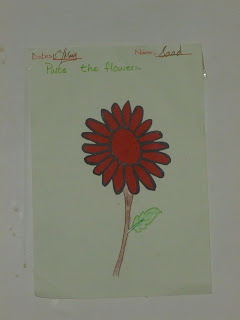 When we went to pick him up he was so excited! He talked nonstop all the way home and for the rest of the day. He was so excited, telling us everything he did. The next day(Wednesday) Tariq dropped him off and he cried a bit less. Thursday he cried a bit less than he did on Wednesday. MashAllah, today he didn't cry at all! He came home and immediately had to tell me how he didn't cry, and of course I made the biggest deal out of it. 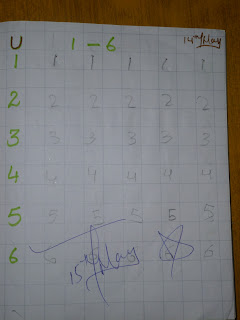 He got a star on his first day's math work!

We have been practicing ABC's, 123's and we had just started teaching him Urdu letters recently at home, so he is doing pretty well in his class work. He has four subjects-English, Math, Urdu, and Islamic studies. They keep the Islamic studies pretty simple, they have a little book of question and answer that they read with the kids.
Posted by Aishah at 11:00 PM

hmmm.... congratulations...and the items are cute..

Hi Eva! I was wondering if you have an email address where I would email you privately to get some relationship advice as I am in an intercultural relationship.

kellbell-you can contact me at-
evaali98 at gmail dot com

Masha'Allah.. I thought you werent putting him in school over there?? Insha'Allah he will make tons of friends which will bring him out of his shell.. I want a conversation with him!!! ;)

We weren't planning on it,(you probably understand why I was hesitant!), but he is really so shy, and I want him to open up a bit and it is working very well mashAllah. He shakes hands with guests and will even say salams, instead of sitting in a corner looking at his feet. The school is very close to us and one of my sister in law's friends is a teacher for the class so we feel a bit safer knowing that.