A while back while we were still in Pakistan, I was sitting down stairs and Saad comes up to me quietly, with his hands behind his back. Usually this is the sign that he has something he shouldn't, but on that day he just came right up instead of trying to skirt around me with his hidden treasure. He told me in a very proud little voice, full of dramatic little pauses- "Mama....I...brought....you.... a......", and then with a big dramatic flourish, he brought his hands forward and said-"FEATHER!!!"

It was a very pretty light green feather, that he had found on the stairs. He was so proud of having brought me this gift, and it was such a pretty feather, that I made a huge deal out of it. I profusely thanked him and made a big deal of saving it in my journal.

After that he brought me every single feather he found, from the pretty colorful ones to ratty old crow feathers. I made a bid deal of every single one, he was just so sweet, proud of his gifts for Mama. My collection of feathers in Pakistan grew very rapidly.

Here in Abu Dhabi, my brother in law keeps several chickens. After we got here Saad started to collect chicken feathers. It was not long before my two little nephews started to bring me feathers, and I kept making a big deal out of them. 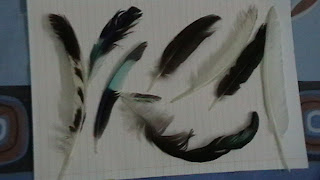 Saad even found several feathers when we went on our little trip after Eid. In 24 hours he found feathers for me in three different Emirates(RAK, Sharjah, and Abu Dhabi).

My sisters in law have several students that come daily for Qur'an reading lessons, they are all less than nine or ten years old. They do not speak very much English, and are very shy when they do, so they don't talk to me a lot. It was not very long before they noticed our feather collection fun. I have no idea what they think of this little game, but now they too have started bringing me feathers. They are so sweet, so I thank them for each one and keep them in a plastic cup in the window.

Now comes the question. What the heck am I going to do with so many chicken feathers?!?!?!
Posted by Aishah at 10:34 PM

Awww, that is so sweet and you are making those kids feel so special :)