Our first day of Eid started early, in fact my three young sisters in law and I did not sleep at all. Too much excitement, last minute cleaning, and I had to finish sewing my Eid suit! When we came to UAE on the 20th my father in law had asked me to help the three girls and my brother in law's wife to sew their own suits. I was supposed to just explain, while they did all the work, so they could learn. They all finished up, and I waited until last to finish mine as I could work faster. So I finally finished at 3 am! Alhamdulillah it came out wonderfully! The suit was a gift from my friend Ammena, that she had given me before she went back home. I thought about giving it to a tailor while still in Pakistan, but it is so beautiful and I was worried about how good they would do, so I sewed it myself. 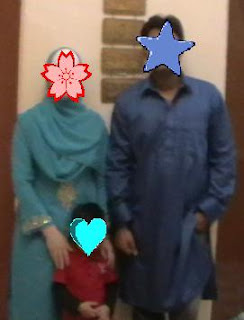 So after finishing my suit I mendhi-d up my hair, and we tried to work on our hands too, but the cones that we had bought here in Abu Dhabi had no color. :-( We all finished up our cleaning, and prepared our families traditional breakfast dish-sheer korma. Sheer korma is a sweet dish, made of vermicelli noodles, milk, sugar, cardamoms, and a turka of ghee with slivered almonds, pistachios, raisins and sliced dry dates. Sometimes we put silver foil on the top as a decoration. 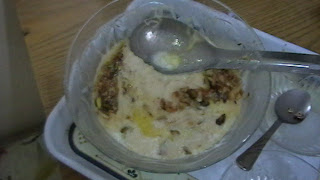 Sheer Korma, Oops, didn't get a picture before someone dug in!

After preparing the breakfast there was the traditional bathroom scuffle/race trying to get all eleven people in the family-showered, dressed and ready. I was ahead in the race, taking my shower early because I knew what would happen. Why does no one else ever seem to remember the bathroom race?

After the bathroom race we all piled into the van, we could here the calls from the local masajid, but as we drove around they were all finishing. I began to get a bit upset, we were going to miss the Eid prayer! We finally found one where they had just started, but my brother in law didn't see any women around so he told us to wait in the car, and took the kids. I started to cry, I haven't been to a masjid in well over two years, and I spent the last two Eids all alone in Pakistan as the rest of the family was here in UAE.

One of my sisters in law said not to cry, lets get out and check if we see any women. So we got out of the car and walked towards the masjid. All gents everywhere, not a woman in sight! I was getting more upset and just decided to turn around and go back to the car. As we were almost back to the car, a woman came around the corner in her car. I figured she was just headed home or something, but my sister in law suggested we wait a minute and see if she stops. So we did, we watched her pull up in back of the masjid, get out of her car and very quickly head around the other side. We ran! I was so happy, Alhamudulillah she came when she did, or we would have missed it! We followed her and found the ladies entrance, after skirting around the huge crowd of men, on the far side of the building.

After the khutbah was finished, we went out and waited for the crowd to thin a bit, and followed my father and brother in law to where Tariq had pulled up the car. As we all piled in again, Tariq looked at me and asked why I was crying, and I could barely speak.

We went home and had a huge breakfast, then all went to sleep for a couple hours. We got up and had a big Eid meal(chicken pulao for the main dish), and then just hung out all day.
Posted by Aishah at 5:55 PM

Email ThisBlogThis!Share to TwitterShare to FacebookShare to Pinterest
Labels: About Me, Abu Dhabi, Eids, Family, Ramadhan

Glad you managed to join in with the Eid prayer!

men eh?! lol... how was Saad at the prayer? did he go with you or stay with Tariq? Masha'Allah on sewing the outfit hun.. I would love to see better more close up pictures if you have any :D take care xx

Ammena-InshAllah more pics will be going up on Facebook shortly!