This morning I heard the sound of a pipe being played outside, and since Tariq was sleeping and his dad was out for a walk, I was sure I was going to miss this one. Alhamdulillah my father in law came back just as the samp wala was walking past our door and my sister in law and I quickly asked him to stop him for us to see. 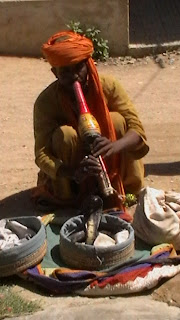 When my father in law asked about the snake, the wala said it was five years old and had the venom sacks had been removed. He didn't stay very long, just about five minutes. It was pretty cool to see the snake come up and sway around a bit. The samp wala had to tap it a little to get him to come up out of the basket. I don't know if it was sleeping or just annoyed at having to do this all the time. After he got the snake up and did his little performance my father in law gave him some money and then he put the snake back in and left.
Posted by Aishah at 2:22 PM

I remember when I was in India, I loved hearing/seeing all the "walas" come by. Hawking vegetables or fruit, usually, or handmade brooms. It was definitely a unique part of the culture in India/Pakistan most people never experience. :-)