Miswak is one of those things that, at first, I thought was kind of strange. Tariq showed me one that he had in America, and I wondered why you would use a stick when there are perfectly nice brushes. 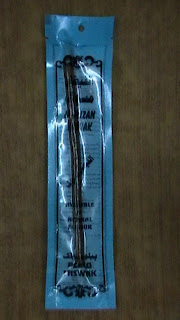 When we were in Abu Dhabi I had read a bit more on the sunah of miswak and so when Tariq's sister offered to give me half of her miswak to try I decided to go for it. The one that she had bought was a dry type, not a moist one in a pack so I had to first soak it in a glass of water. 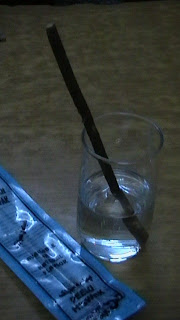 Then peel off about half an inch of bark and chew it a bit to make it brush-like.
It was strange at first, but eventually I got used to it. 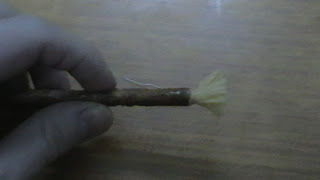 I didn't use the miswak all the time, but recently I decided to use it more often. So every time I brush my teeth with a brush I always follow with a miswak and also use it sometimes between brushing. I have gotten into the habit and now it doesn't feel strange at all.

One of the benefits that I have noticed is that it helps me concentrate better during my prayers. The process of using the miswak and then making wudu seems to calm my mind so that I pay attention, instead of rushing my wudu and then not being able to concetrate during salat.
Posted by Aishah at 8:22 PM

It is common to spot folks with stained teeth. I have to admit that they seem certainly hideous. We reside in a world that is enthusiastic about looks and whiter teeth can certainly assist enhance your looks. They can help you produce the right first impact. The Miswak is a chewing stick that comes from the Salvadora Persica tree and it has countless features to promote good oral health.